What is Cosmetic Mole Removal?

Most of us have some moles we are either born with (congenital), or moles that appear over time as we expose our skin to the sun. Moles are clusters of pigmented cells that appear as small, dark spots on the skin, and can vary greatly in size and color. Moles typically appear on the face, arms, legs, and torso, but can develop anywhere on the body. Although most skin moles are harmless, in rare cases they can become precancerous, necessitating surgical removal.

The best method for mole removal depends on different characteristics of the mole including size, shape, and color. For flat moles, skin tags, or protruding moles that have been relatively stable since birth (with no rapid growing, shape changing, etc.) treatment with laser or excision can remove them easily. Other moles that have changed in color or contour should be removed for biopsy to determine if they are associated with skin cancer. 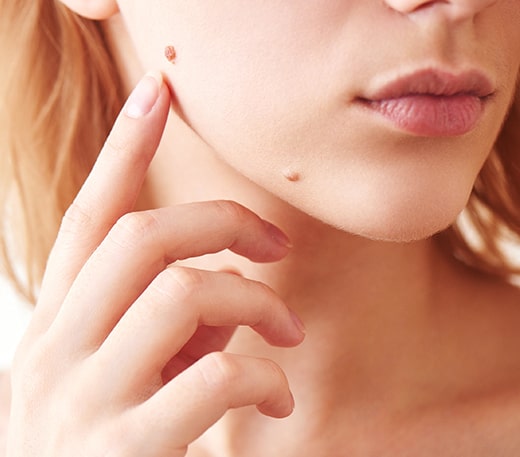 Mole removal is typically done on an outpatient basis and is relatively painless. Moles can be removed by:

Shave removal
Some skin moles can be shaved down with a scalpel. The area gets numbed with a local anesthetic beforehand, and usually, only a small pink mark is left after the removal.

Cutting / Excision
With this type of treatment, a local anesthetic is injected, and then the mole is cut out, along with a small area of the surrounding skin, with a scalpel or surgical scissors. Some moles may have cells that have grown underneath the top layer of skin. Cutting these out may require a few stitches to close the skin, which can leave a small scar that will fade over time.

Freezing
Moles that are non-cancerous and haven’t grown to the deeper layers of skin can be frozen off using liquid nitrogen. This type of treatment may leave a small blister on the skin, but is a relatively simple outpatient procedure.

Laser Removal
Smaller, non-cancerous moles that don’t protrude above the surface of the skin may also be removed with a laser treatment. This skin moles treatment uses intense bursts of light radiation to break down the mole cells in the skin. This method usually takes two or three treatments to eradicate the mole. While excision and cutting are the more common and recommended methods of removing moles, laser removal can be used for harder-to-reach areas, such as on the face or ears, and can be helpful for eliminating multiple moles at the same time.

Depending on the type of mole and the method used to remove the mole, recovery will vary. Your doctor will provide information and instructions on how to care for the surgical site specific to you and the location of the site.

Can I remove my mole at home?

There are many sites offering advice on at-home mole removal treatment options. However, it is always recommended first to visit a doctor to determine if a mole is cancerous and to advise the best course of treatment. A doctor can ensure that a mole is removed correctly, with little complications and the minimum possible chance of scarring.

Can a mole come back after treatment?

In some cases, a mole can return after treatment. There is a small chance that some mole cells were missed and the mole grows back. While this is usually not the case, no mole removal treatment is 100% effective. That’s why, especially for irregular and cancerous moles, it is important to schedule follow-up appointments with your doctor every 6 to 12 months.