What is CoolSculpting Elite?? 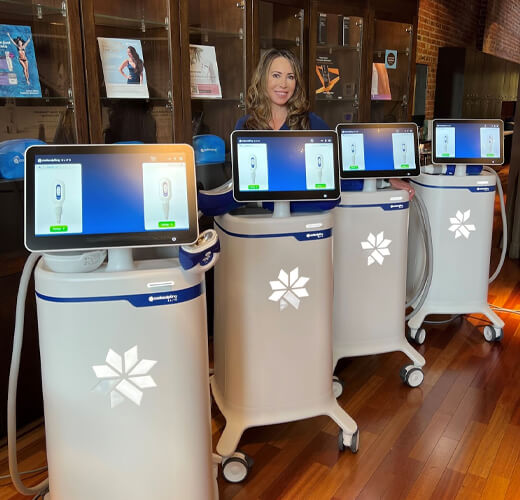 The CoolSculpting Elite device freezes and kills fat cells through cryolipolysis. The Elite applies targeted cooling to trouble spots to freeze and eliminate fat cells. It can reduce stubborn fat by up to 20-25% in the treatment areas with little to no downtime and surgery.

There is no downtime with the  CoolSculpting Elite treatment

Why is laser & skin the premier COOL SCULPTING facility in northern california?

Who are ideal candidates for COOL SCULPTING treatments?

Some people assume they could use CoolSculpting as a weight-loss treatment, but this is not the case. CoolSculpting is meant to reduce isolated pockets of fat that are difficult to target and shrink with changes in diet and exercise.

What are the benefits of coolsculpting?

Reducing stubborn fat pockets by 20 to 25 percent has undeniable benefits, but there is more to it with CoolSculpting.

What areas can be treated with coolsculpting?

Initially, the FDA approved CoolSculpting for the abdomen, with our office performing those initial clinical trials. Since that first approval, more and more treatment areas have been given the green light:

Why is laser & skin the premier coolsculpting facility in northern california?

Laser & Skin has been doing CoolSculpting longer than any practice, starting with the first human clinical trial.

Dr. Kilmer was on the medical advisory board for the original start-up company, Juniper, which evolved into Zeltiq. Based on many of her suggestions and leadership in the initial human clinical trial, CoolSculpting is a worldwide, premier way to remove fat to enhance body sculpting permanently. CoolScuplting became so successful that the company was purchased by Allergan and is now part of its Brilliant Distinctions program.

We are now up to four machines and avid proponents of dual-sculpting and treatment for transformation – treating any size fat accumulation in nearly any location.